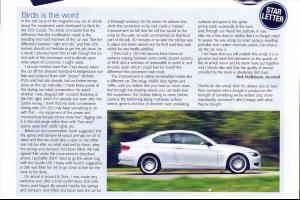 In the June,or July issue of the magazine,you ran an article about the suspension pack,developed by Bird's Garages,for the 335i Coupe. The article concluded that the difference that the modification made to the handling and road manners of the car was "like the difference between night and day",and that any 335i owner should not hesitate to get the job done.

As a result,I phoned Kevin Bird to talk through the ins and outs of the conversion,and to decide upon what extent of conversion I might need.

I should mention here that I had already taken the car off the dreaded standard fit Bridgestone runflats,and replaced with "proper"Michelin PS2's,and had also already had an Evolve remap done on the car.Naturally I made Kevin aware of this during our initial conversation. He asked whether I was plagued with constant flickering of the DSC light,which actually I am not,even after the Evolve remap. I think that my fairly conservative driving style (I'm 55) may have something to do with that,my enjoyment of the power and mountainous torque,comes more from digging into it in the mid range,rather than with"boy racer" sprints away from traffic lights etc.

Based on our conversation Kevin suggested that perhaps just the spring and damper kit would be all that I might need,and that we could take a view on the stiffer rear roll bar after an initial road test by Kevin,after the springs and dampers had been fitted. We had agreed that under the circumstances described above,I probably didn't need to go the whole hog with the Quaife LSD.

Happy with Kevin's suggestion,a date was fixed for me to go down to Iver,for the work to be done. That was yesterday,22nd July.

On arrival at around 8.15am,I was made very welcome,and after a brief confirmatory chat with Kevin,work began,and by around mid day,the springs and dampers were fitted,and Kevin took the car for a thorough workout.On his return,he advised that whilst the conversion so far had made a marked improvement,he did feel that the rollbar would be the icing on the cake,and so work commenced on that final part of the job.90 minutes or so later the roll bar was in place,and Kevin carried out his final road test,with which he was totally satisfied.

I then had a 120 mile journey back home on surfaces varying between some pretty decent sections of M40,and a selection of reasonable to awful A and B roads,upon which to feel for myself the difference which the conversion had made.

I can only say that the improvement is utterly remarkable! It feels like a different car. The set up actually initially feels tighter and stiffer,until you realise that you have so much more feel through the steering wheel,you can really feel the suspension a chassis talking as never before.Gone is the tram lining along motorway surface seams,gone is the loss of direction over undulating surfaces,and gone is the spine jarring crash,especially at the back end,through our friend the pothole. It may take me a few days to realise that no longer do I need to weave my way along our road system,avoiding potholes,sunken manhole covers etc,but what a joy the car now is.

I do hope that you will feel able to publish this e mail,it is a genuine and heart felt attestation to the quality of the kit which Kevin and his team have put together,and I should also add that the quality of service provided by the team is absolutely first class.